Because of their training as co-responders Janice said she felt they had a “magic cloak of safety, that a medical emergency won’t happen to you”.

Rongotea Volunteer Fire Fighters and husband and wife team, Janice and Donnie, are well equipped with the lifesaving skills required to respond in a medical emergency. Rongotea is a tight knit community based in rural Manawatu with a population of just over 600 people.

Donnie, a mechanic by trade, has volunteered for the Rongotea Fire Brigade since 1976, working his way up through the ranks to Station Chief. Janice, having raised 6 children, joined the brigade 2 years ago to give back to her community. They both have attended their fair share of medical call outs.

Because of their training as co-responders Janice said she felt they had a “magic cloak of safety, that a medical emergency won’t happen to you”.

Janice recalls the evening of Friday May 28 2021 in great detail. Donnie was sitting on the couch, scrolling through his phone. She was playing with their new kitten when she heard Donnie making a choking/snoring noise. “I shook him and I thought he was having me on at first, he was still holding his phone with his eyes open. But then I recognised something serious was happening”.

Donnie was in cardiac arrest.

A cardiac arrest is an electrical storm on the heart which causes it to stop. This is different to a heart attack, which is a circulation problem blocking blood flow. A cardiac arrest is sudden, and extremely fatal with a survival rate of only 13%.

Janice credits her CPR training for Donnie’s survival. “My training just kicked in. I switched from Janice the wife to Janice the co-responder.”

She dialled 111, pulled Donnie onto the ground and began CPR. In a rural community like Rongotea the closest ambulance is 20 minutes away. 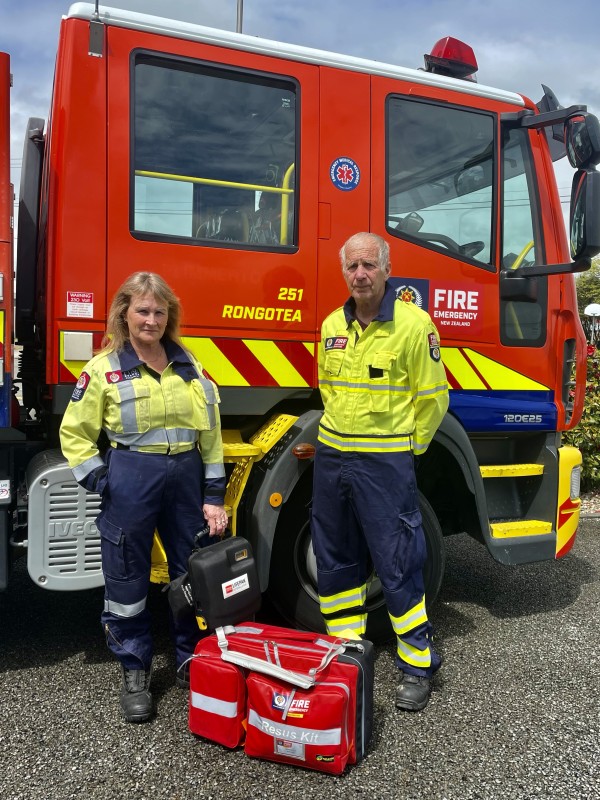 Janice performed CPR on Donnie for close to 5 minutes. She said she felt like it was much longer. The act of CPR is physically demanding. Knowing that this was the only way to save Donnie’s life kept Janice going.

She explained the extreme relief when she heard sirens, knowing her team was coming to help.

In 2021 the Rongotea volunteer fire brigade has attended 3 sudden cardiac arrests including Donnie’s. In New Zealand 2000 people per year have an out-of-hospital cardiac arrest only 1 in 10 will survive.

Both Janice and Donnie described the difficulty of attending medical call outs when there is a bad outcome.

The Rongotea Volunteer Fire Brigade is a dedicated and close knit team with 18 current members. The majority of which have been involved from anywhere between 10 to 50 years.

Donnie received one shock from an AED administered by the Rongotea Brigade, which combined with high quality CPR from his brigade and his wife saved his life.

Donnie was transported by St John Ambulance to Palmerston North Hospital and remarkably was awake and responsive within 4 hours.

He was later transferred to Wellington to have an Implantable Cardioverter-Defibrillator (ICD) installed in his chest. The ICD detects if Donnie has another abnormal heart rhythm and will administer a shock if he ever goes into cardiac arrest again.

Donnie was back at home within 7 days.

He surprised his doctors with his quick recovery, but joked that Janice was “a bit hard with her compressions.”

Two weeks after his cardiac arrest Donnie celebrated his 68th birthday with his family.

Janice and Donnie have shared their story in the hope that if they inspire 1 person to get CPR training it would be worth it.

“You might think you know how to do CPR from TV or Movies but it’s the formal training and understanding the DRS ABCD sequence that gives people the best chance of survival.”

Thank you Janice and Donnie for sharing your story with us.

Janice and Donnie at Rongotea Volunteer Fire Brigade in the Manawatu

A 20-year-old is not usually someone you would associate with a cardiac arrest. A cardiac arrest can happen to anyone, anywhere and at any time without warning.