News & Media > Ella's Story: "I know I did everything I could, because I was trained."

Ella's Story: "I know I did everything I could, because I was trained."

News & Media > Ella's Story: "I know I did everything I could, because I was trained."

Ella's Story: "I know I did everything I could, because I was trained."

Geoff’s story did not end how anyone expected.  At 62 years old, Geoff was fit and healthy, running a motel in the Hutt Valley and enjoying the pleasures of life along with his wife of 40 years, Alison.

On the 14th of October 2020, Geoff collapsed of a cardiac arrest while on a campervan holiday in the Nelson region with Alison and their youngest daughter, Ella. Geoff and Alison were travelling down to a family wedding in Christchurch and taking the time to explore the South Island. Ella, who had recently finished university and started her first graduate role, was invited to join her parents on the first leg of the journey, and together they had been enjoying a number of day walks including parts of the Abel Tasman walk.

Almost two years on, Ella has chosen to share her experience as part of the New Zealand Resuscitation Council’s World Restart a Heart Campaign with the hope that those of you reading will become trained in CPR so you never have to face the possibility of being a bystander who does not know how to respond.

Ella was due to travel home to Wellington and back to work on the afternoon of the 14th of October from Nelson, so the family looked for something to do before Ella’s flight. Ella recalls seeing an advertisement for the “Centre of New Zealand Walk” which was a light 20 minute stroll to the top. Once at the top, it was an overcast day and they were all taking time to look out at the view and take photos.

Ella remembers looking at her Dad who was leaning over strangely and had sat on the wooden railing surrounding the monument. Then Geoff suddenly collapsed over the railing. Initially Ella and her mum Alison thought he had lost balance and ran to help.

“From the time of collapse I started CPR within 30 -60 seconds”, Ella said. There were four other people at the look out, and Ella and Alison asked them if they knew CPR, but they didn’t. Two of the people ran to get help while the other two called emergency services.

Ella had received resuscitation training at school as part of her role as a pool lifeguard and had had a refresher the year before through her job at a gym, and Alison was also first aid trained.

Because of Geoff’s location when he collapsed, Ella began a long process of CPR before Emergency Services could get to them, with Alison swapping with her to give her a break. “I hated seeing Mum do CPR -  her and Dad were best friends and married for 40 years, I wanted to protect her.” Ella did CPR for 25 minutes. She remembers counting and at times humming “Staying alive” in her head to keep time. “I knew what I was doing, it wasn’t hard in the moment because I just kept going.”

Fire and Emergency NZ (FENZ) was first on the scene, bringing four wheel drive vehicles with an AED to where Geoff collapsed. Because of where they were, a helicopter was the only option to airlift Geoff to the hospital. FENZ staff took over CPR and their AED was able to deliver a shock. Geoff had to be stable to be transported in the helicopter. Flight paramedics winched Geoff to the helicopter as they were unable to land, and he was taken to Nelson Hospital where cardiologists were able to perform an emergency procedure on his heart.

Ella and her mum were taken to the hospital by a local police officer. They managed to call Ella’s older sister Phoebe and her partner Matt, who got a flight to Nelson later that evening.

“We didn’t know Nelson at all, but I just kept thinking once Dad is at hospital he will be fine,” Ella said.

It turned out that Geoff had suffered a sudden and massive heart attack at the lookout, which had a very low chance of survival, and he passed away in the early hours of 15 October 2020. His wife Alison, two daughters Phoebe and Ella and son-in-law Matt were grateful that they could be by his side.

The family spoke to doctors after Geoff’s death and were told of the severity of Geoff’s heart attack. “They told us that Dad could’ve collapsed outside the entrance to the hospital, and there would’ve been the same outcome,” Ella said.

Every year in New Zealand over 2000 Kiwis will have a cardiac arrest. Not all survive. Early CPR and defibrillation are important parts of the chain of survival. You never know when you may have to respond to save a life. Ella emphasises that training equipped her with the best possible chance.

“I know I did everything I could, because I was trained. I would hate for someone to be in the situation that we were in and feel like they didn’t know what to do.”

Thank you to Ella and her family for sharing their story with us. 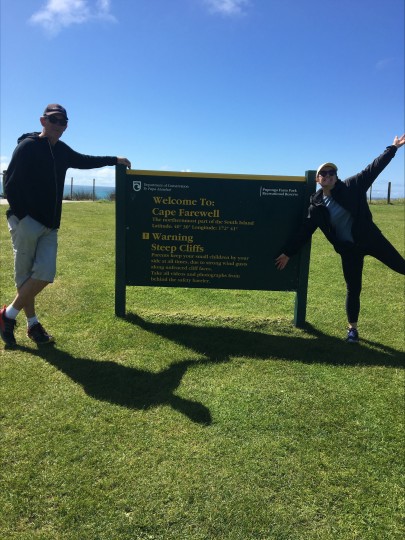 Ella and her Dad Geoff on her 21st Birthday.